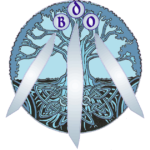 Getting Involved with the BDO

There are many ways in which you can get involved with the work of the British Druid Order. The BDO organises and takes part in events of many kinds, from the open, multi-faith festival celebrations that began with the formation of the Gorsedd of Bards of Caer Abiri in 1993, through to the building of a fantastic, magical roundhouse in cooperation with the Shropshire-based Cornovii Grove and members of OBOD. Other events include spirit camps, workshops, retreats and public ceremonies at events such as the Tewkesbury Medieval Fair. The Order holds, and partakes in, open ritual, Gorseddau, workshops, retreats, camps and, newly under development, the Druid Hedge College programme.

For more details, see the various pages using the menu.