The Druid Tarot was created by Greywolf in the 1990s as a series of woodblock prints based on archaic images from British and European history and prehistory, ranging from the triple spiral illuminated by the rising Midwinter sun in the rear chamber of the Newgrange tomb-shrine in Ireland through to a Shiela-na-Gig figure from a medieval church in Herefordshire. Some images will doubtless be familiar,

such as the ‘Druid shaman god’ from the Iron Age Gundestrup cauldron or the Bull with Three Cranes from a pagan altar found under the Christian altar in the Notre Dame de Paris church. Others will doubtless be less familiar, drawn from Celtic coins, Pictish carvings or bronze figurines found associated with pagan shrines in Northern France. 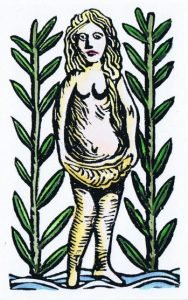 This new edition contains four new cards not in previous editions, these being the Stone, Cauldron, Sword and Spear, representing the four traditional elements of Earth, Water, Fire and Air. The booklet that goes with the cards has also been revised, updated and expanded and includes some background on each of the images as well as divinatory meanings and suggestions for layouts.

It should be said that this is not a tarot of the traditional type as there are 29 cards rather than the tarot’s usual 78 and while in some cases individual cards may resemble those of other tarots, many do not. We also wish to make clear that some of these ancient images are stark in a way that some folk today may find unsettling, including fearsome beasts and exposed genitalia. You have been warned! 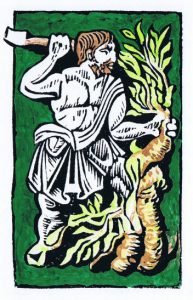 As shown in our illustration above, the cards are printed in black and white. This is so that you can colour your own deck, personalising it and making it unique. Here are a few cards Greywolf has started colouring using standard water-colour paints. The card stock used will also take felt tip pens and is likely to take most water-based paints, drawing inks, etc., though we have not tested them for these. Hints and tips for painting the cards are included on a separate sheet as is a blank card for you to try out the colours you intend to use.

This unique deck is, we believe, one of the most original, ancestrally true and distinctly pagan divination tools available anywhere. We have had 200 copies printed. We like it. We trust that you will too… /|\ 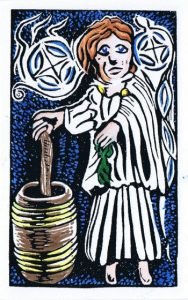 There are no reviews yet.

Be the first to review “The Druid Tarot” Cancel reply

Please be aware that if you are buying any items from the BDO shop, there will be a delay in packaging and sending out items until after the 8th June.